Summer is finally here and it’s time to dust off the grill or break in that new one with this grilled Central Amerian-inspired tequila lime butterflied chicken with cilantro, epazote, and pitiona.  Butterflying the chicken will allow for faster, more even cooking.

In my opinion, pasture-raised chickens have much more flavor than commercial chickens so when I do cook them it is usually using ingredients that will not overpower their flavor.

Tequila lime marinated chickens are not anything new but I have added three herbs that compliment the tequila and lime juice in the marinade but again don’t overpower the overall dish:  fresh cilantro, dried epazote, and dried pitiona.  Epazote is a herb popular in central and southern Mexican, and Guatemalan cuisines.  It has the flavor of petroleum and mint; sounds unusual but is perfectly paired with the tequila,    Pitiona, a leafy shrub, has an oregano-like flavor and is used in Oaxacan moles and stews.  If you don’t have either and don’t have a Latin or Mexican grocery close to you use dried mint and dried oregano instead but only half the quantities listed below.

Some may say that this looks more like a “spatchcocked” chicken and not a “butterflied” one but there is a big difference.  Spatchcocked chickens have the backbone, breastbone and the leg bones removed so what you have is essentially a “flattened” chicken.  Butterflied whole chickens, on the other hand, simply have the backbone split and the carcass flattened out; no bones removed.  My method is a mix of the two; I use kitchen shears and a stiff poultry knife to remove the backbone and breastbone, but I do leave the leg quarters intact.  Butterflying the chicken will allow for faster, more even cooking.  (I save the bones, place them in a freezer-safe plastic bag and once I have accumulated 1 1/2 to 2 pounds I take them out to make chicken stock.)
INGREDIENTS

1 tbsp dried pitionaSubstitute 1 and 1/2 tsp dried Mexican oregano, or Italian oregano, if you don’t have access to pitiona.

With the exception of the sliced onions, place all the ingredients for the marinade into a medium to large mixing bowl, mix well.If you taste the marinade at this point it will taste as if there is too much salt and pepper in the marinade but remember that this is the marinade for a 2-3 lb chicken.


Prep the chicken:Carefully rinse out and drain the cavity of the chicken.
Pat the outside of the chicken dry with a paper towel, place breast side down onto a cutting board.
Using kitchen shears, or a stiff poultry knife, cut through the back of the chicken, one inch from the centerline.Save the removed backbone for stock.

At this point, you can flatten the chicken even more in preparation for the marinade.
Place half of the sliced onions on the bottom of a large, non-reactive, stainless steel roasting pan.
Place the butterflied chicken, skin side up, on top of the layer of onions, place the rest of the onions on top of the chicken.  (see photo on the left above)
Pour the marinade over the chicken and onions (see photo on the right above), cover with plastic wrap, place in the fridge overnight or for at least 8 hours.

Remove the roasting pan with the marinating chicken from the fridge, keep covered with the plastic wrap and allow to cool to room temper, about 30 – 45 minutes.
Get the gas or charcoal grill ready or…Note:  You may also roast this in the oven if that’s a better option for you. (see below for instructions) 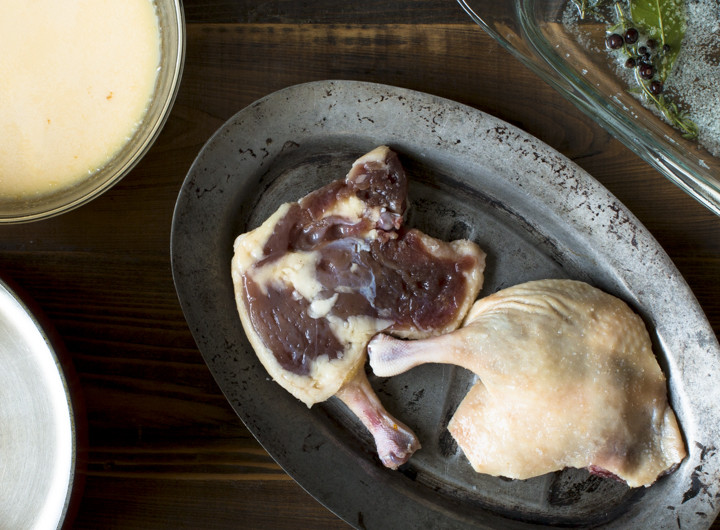 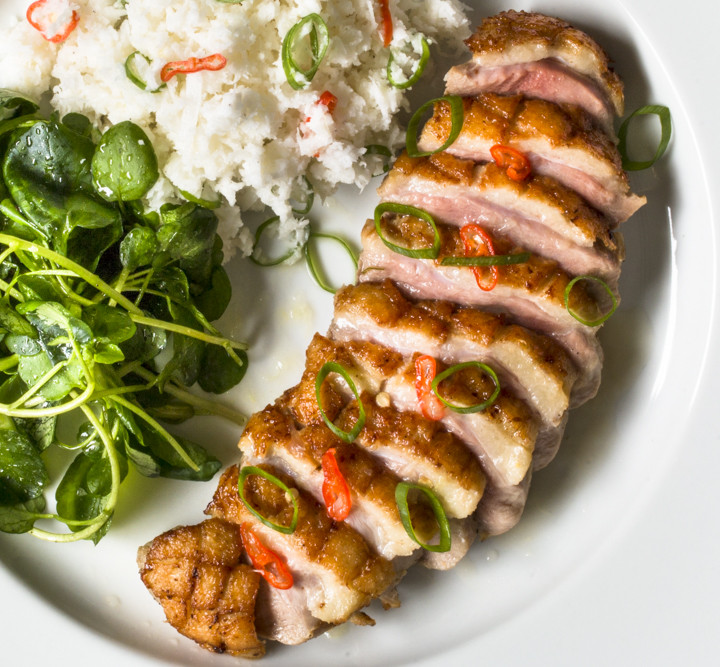 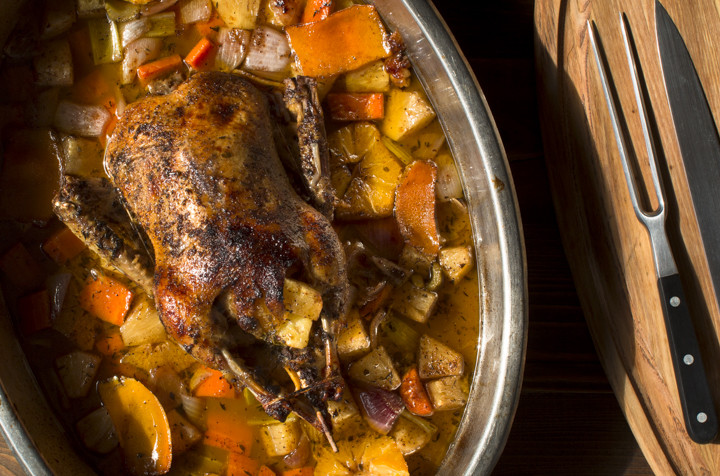